Director Phelim McDermott tackles another one of Philip Glass’s masterpieces, following the now-legendary Met staging of Satyagraha. Star countertenor Anthony Roth Costanzo is the title pharaoh, the revolutionary ruler who transformed ancient Egypt, with the striking mezzo-soprano J’Nai Bridges in her Met debut as his wife, Nefertiti. To match the opera’s hypnotic, ritualistic music, McDermott has created an arresting vision that includes a virtuosic company of acrobats and jugglers. Karen Kamensek conducts in her Met debut.

“Please note that Akhnaten will be performed without subtitles, except for scene titles and select texts. Director Phelim McDermott’s goal is to create a theatrical experience that is beyond words, plot information and conventional storytelling. He wants the audience for Akhnaten to be overtaken by the hypnotic nature of the music, the visual imagery and the pageant-like nature of the piece. The scribe sets the scene in English, and the rest of the text (including ancient Egyptian and Hebrew) which does not have subtitles is highly repetitive, often fragmented and ritualistic rather than descriptive.” 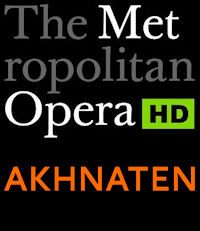