The Unbearable Weight of Massive Talent stars Nic Cage as a man called Nick Cage. He's a once-wildly popular actor and action hero who has fallen on bad times via his compulsion to live like a major star, even though he is no longer earning like one.
A meeting with his agent yields only an offer of a paid appearance at the birthday party of a wealthy arms dealer. Who may be even more of a criminal than the usual codes of conduct of arms dealing would allow.
Cage travels to Mallorca and into the dreams of this superfan, with only a couple of CIA agents and then his ex-wife and teenage daughter to step in and help if the situation should become just too weird. Which, naturally, it will.
An unexpected friendship develops between the two men, even as Cage is told that his host is a kidnapper and terrorist, giving this film exactly the emotional heart of a classic schlock thriller. Which is the point. This film about Nicolas Cage must become a “Nicolas Cage Film”, or the joke cannot end.
Because Cage will always give a role everything he has, will always deliver the most unlikely of lines as though he is alone in a desert with no one to hear him scream, will always commit to and believe in the most benighted of projects – and by doing so he completely transcends any ideas about “good” and “bad” acting. He is simply being perfect at being Nicolas Cage.
With a scene-stealing Pedro Pascal, Tiffany Haddish, Neil Patrick Harris and the brilliant Sharon Horgan on the bench, Gormican is not short of charisma and talent here. But Cage is the reason this film even exists. That, and maybe to revitalise the Paddington 2 fan-club.
Very few actors could stand this level of mythologising and still deliver an even faintly credible or likeable performance. But Cage can and does.
What Gormican taps into, and what Cage delivers, makes The Unbearable Weight of Massive Talent into something special. It is a film about why we love film. Bravo. 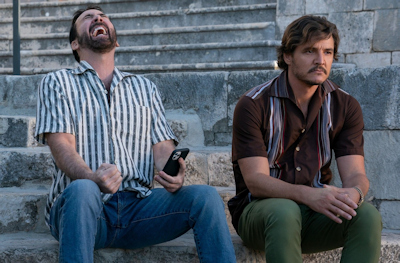 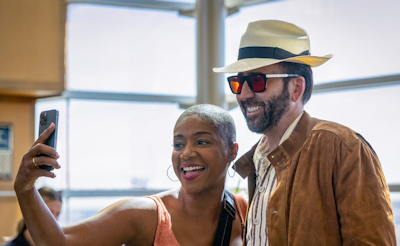 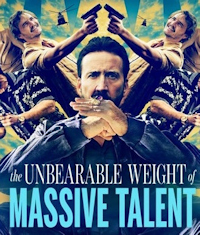